The Arrowhead Landfill located in Uniontown, Al was selected as the dump site for the TVA coal ash being dredged from the Emory River in Kingston, TN. Eighty-eight railcars of coal ash are arriving in Uniontown seven days a week. Over the next twelve months over 3 million tons of coal ash will be deposited in Uniontown.

Many residents live in extremely close proximity to the Arrowhead Landfill. Public meetings to inform the citizens have been limited. The residents are concerned how the coal ash is being handled in their community and what hazards may be present now and in the future.

I returned to Uniontown this past week. I had first visited the area last August. Changes have occurred. I spoke with several local residents wanting to voice their concerns. One of them is Ruby Homes. The audio at the beginning of her story was recorded as I opened her front door and stood on her porch facing the landfill.
For a larger version of the photo/audio story click (here).
be strong, be safe, Carlan
Posted by Carlan at 11:05 AM No comments: 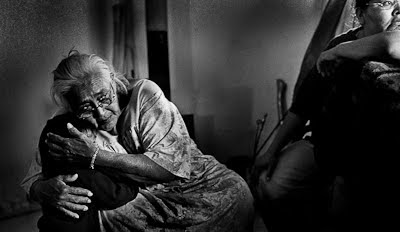 An exhibition by the photographer, Carlan Tapp opens in the Heuser Gallery this week. Tapp is the 2010 Bunn Lecturer in Photography. He uses the medium’s documentary qualities to bring light to the devastation caused by coal mining and coal-burning power plants in the Southwestern United States. Tapp will present a public lecture on February 18 at 5 PM on the Question of Power.

Posted by Carlan at 7:10 AM No comments: