Stewardship of the Land

The Greater Chaco Landscape is now under unprecedented assault by the oil and gas industry, with the enthusiastic support of the Trump administration and Acting Interior Secretary Bernhardt. There are already more than 20,000 oil and gas wells in the region, and the drilling is quickly encroaching closer and closer to Chaco Canyon.


Throughout the government shutdown in January, former oil lobbyist Bernhardt stayed on the job as Acting Secretary, working hard to push forward plans for leasing. During the shutdown, 800 employees of the Bureau of Land Management (BLM) were authorized to stay at work to process oil and gas drilling leases. Meanwhile 85% of the rest of the staff at the Department of the Interior (DOI) were furloughed.
In early February 2019, the BLM announced plans to sell more leases in late March (March 28) for oil and gas extraction, quite a number of which were within a 10-mile radius of the park. Then, a few days later, BLM announced that it was withdrawing the lease sales for sites within 10 miles of Chaco Canyon.  Archaeologist Paul Reed of the non-profit cultural resources group Archaeology Southwest says, “I think this is probably a temporary victory, and the parcels will come up again in a future lease sale.”

Land parcels that are still up for lease outside the informal 10-mile buffer zone, but are within the Greater Chaco Landscape, contain many important Chacoan Sacred Sites.

be strong, be safe, Carlan
Posted by Carlan at 12:38 PM No comments: 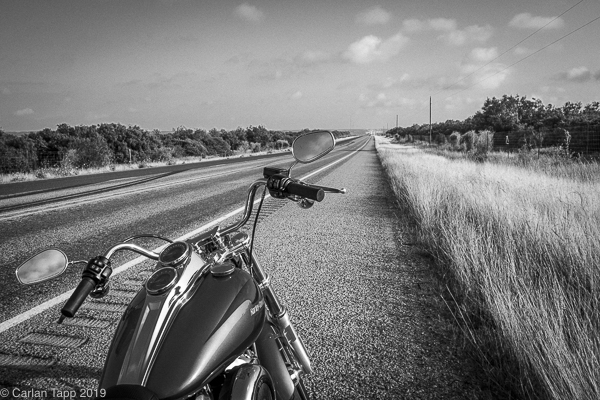 The current issue of Harley-Davidson HOG® Magazine features the HWY83 story I rode, photographed, and wrote last summer.  With the Polar Vortex across the country causing some mighty cold conditions, thought the story might warm you up a bit.  Even my bike is sitting in my heated studio with the battery tender keeping things warm today.  Here is a link to the pdf copy of the full story.  HWY 83.

Keep warm.  Hope you enjoy reading the story as much as I did creating it!

Thought for the day:

I love being on the road.  It keeps me present. Because I'm not allowing my brain to get into any sort of pattern, where I start worrying about things that don't matter.  If I'm in a new place every day, I have to be alert, I'm forced to be in the present moment so I can take what comes.

be strong, be safe, Carlan
Posted by Carlan at 12:07 PM No comments: