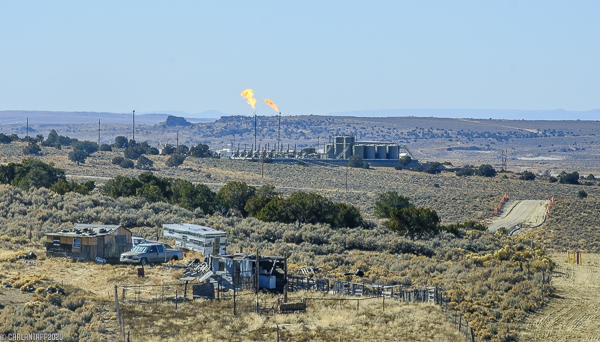 Families living in rural areas south-west of Counselor, New Mexico, are sharing stories about sickly bull snakes and near-death rattlers above ground during the snowy, winter months this past winter and spring.

The people have a theory for what is happening: underground vibrations from hydraulic fracturing, or fracking, forced the snakes from their dens and on to the surface.  Over the years, community members of the Navajo Nation have noticed other changes. Vegetation has died off and the climate has became drier. People living in homes with dirt floors have felt vibrations from the ground late at night, from 2 to 4am.

The Navajo and Puebloan lands of north-western New Mexico where Counselor is located are no stranger to drilling. The first oil well in the area was reportedly drilled in 1911 with natural gas following soon after.

Today, the US Bureau of Land Management is considering a plan, known as the Mancos-Gallup Amendment, which could lease land in the region for some 3,000 new wells – many of which would be for fracking oil and gas. The plan would expand drilling into some of northern New Mexico’s last available public lands, threatening the desecration of sacred Native artifacts near Chaco Canyon while bringing in a swath of new public health risks to a place that’s already reeling from one of the worst Covid-19 outbreaks in the world.

Under the Trump administration, the amount of US lands up for lease to oil and gas companies has soared – 461 milion acres across the country, as of earlier this year. To New Mexico environmentalists and indigenous activists, the new plan is just another instance of the administration’s energy dominance agenda threatening some of the country’s most pristine lands.

Chaco park and other parts of the canyon are protected from drilling through a congressional funding bill. But there are some 250 outlying sites spread throughout north-west New Mexico, said Michelle Turner, an archaeologist studying the region. Many of those sites are connected by ancient roads, she said, which are gradually being erased by drilling-related development.

Covid-19 is making health concerns more prescient. The Navajo Nation and surrounding areas have some of the highest per-capita infection rates in the world. Community members are concerned that air pollution in the region will exacerbate the death toll, pointing to a recent Harvard study showing that people living in areas with higher pollution have a significantly higher death rate.

be strong, be safe, Carlan
Posted by Carlan at 9:29 AM No comments: