I received an invitation to join Barnett Harley-Davidson from Las Cruces (our corporate HD sponsor for Ride in Beauty) for a group ride through the beautiful desert landscape of New Mexico this past weekend. Part of the ride was a planned stop for the semi-annual "open house" at the Trinity Site. 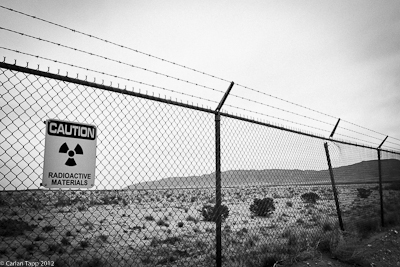 The story as we all know it began in 1942 with the formation of the Manhattan Project. 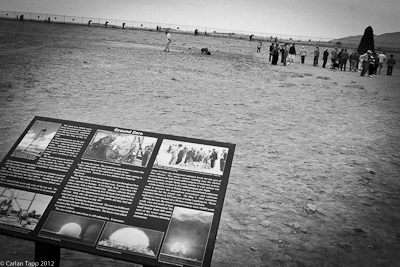 In 1953 the first visitors were allow to visit the site.  The Trinity Site was declared a national historic landmark in 1975. For two days a year, the first Saturday in April and October, the site conducts an "open house". 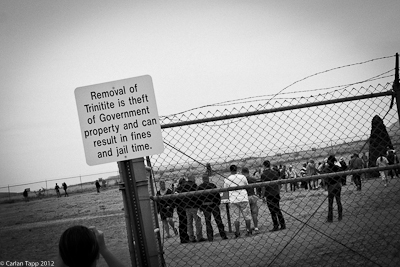 Trinitite, a green glassy substance, found in the ground zero area contains several radioactive elements.  When entering the site visitors are handed a brochure, which states: "Although radiation levels at ground zero are low, some feel any extra exposure should be avoided.  The decision is yours." 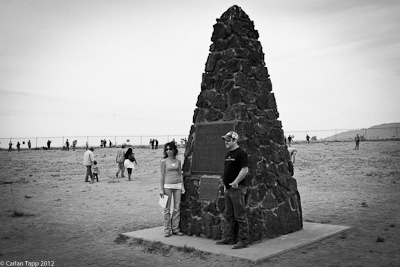 The ground zero monument marks the location of the tower that was used to hold the bomb.  The tower was vaporized in the blast. 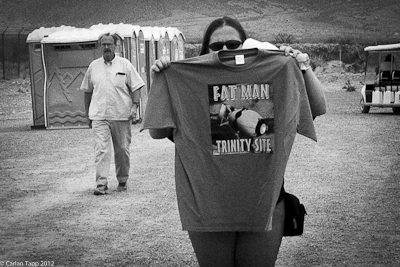 It is a Federal offense to remove radioactive Trinitite from the site, but t-shirts can be purchased. 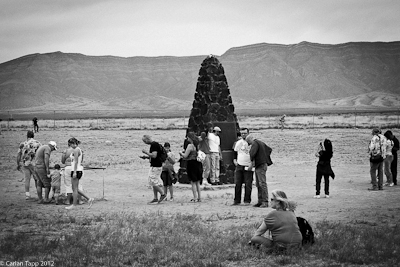 Hans Bethe one of the contributing scientists wrote, "it looked like a giant magnesium flare which kept on for what seemed a whole minute.  The white ball grew and after a few seconds became clouded with dust whipped up by the explosion from the ground and rose and left behind...a black trail of particles."

The stop at the Trinity Site was short...the memories long.  It took another 300 miles of open road for my thoughts to settle.

be strong, be safe, Carlan
Posted by Carlan at 1:37 PM No comments:

When I first met Herman Talbert (also known as Dub) in Bokoshe, last year I knew I was talking to the real deal, as they say in Oklahoma.

Born and raised on the ranch his grandfather homesteaded around 1890, he's raised cattle there since he was 16. For 40 years Dub's lived the cowboy life, which when explained to me, was living with the land, his animals and raising the next generation of cowboys.

Four years after Making Money Having Fun LLC (real name) began dumping coal ash 1/2 mile from his ranch Dub began losing calves, 4 the first year, 6 and then 10. They looked normal, but couldn't stand and struggled to breathe. In January 2011 Dub sold his herd.  "I couldn't take it, seeing those calves die." He'll stay and tend the ranch with his daughter and grandchildren, but their cowboy days are over.

be strong, be safe, Carlan
Posted by Carlan at 8:37 AM No comments: