Remember being a child and seeing snow for the first time, feeling the texture of a rock, the coolness of running water in a stream, or listening to the sound of the wind in the trees?  That is what "child-like wonder" is all about. 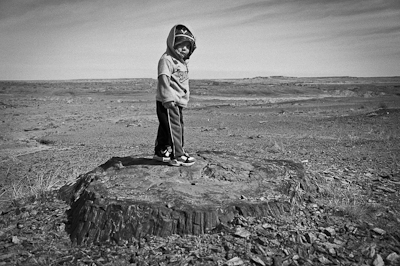 Last Wednesday I watched as Sarah White's 15-month-old grandson climbed to the top of a 65 million year old tree stump.  It was a moment of exploration, discovery, excitement..."child-like wonder".

The tree will soon be lost to the blasting and mining of coal near Burnham, NM.  What will our children 7 generations from now have to experience for their "child-like wonder"?  I wonder...

be strong, be safe, Carlan
Posted by Carlan at 10:28 AM No comments:

The University of Central Oklahoma has recently developed a Biodiesel Fuel Program with the production capability to power many of the diesel engines on its campus. Recycling vegetable oil into biodiesel started with an idea and has led to producing over 150 gallons of biodiesel a month at the University.
I met Carl Shortt in Santa Fe.  He was from Oklahoma attending a photography workshop I was teaching at the Santa Fe Photographic Workshops.  During a morning coffee break I over heard Carl talking about biodiesel.  He immediately had my ear.  Carl enthusiastically shared his story with me.  He extended an invitation to visit the University and see their operation first hand.  On my very next trip through Oklahoma to work in Bokoshe, I called Carl to accept his invitation.

Fueling with French Fries tells the story of three guys sharing an idea using recycled vegetable oil to help save and preserve the world we live in. Click here to view their story.

be strong, be safe, Carlan
Posted by Carlan at 9:06 AM No comments:

The Reality of Numbers:

The highest producer of greenhouse-gas emissions in New Mexico in 2010 was the Four Corners Power Plant, which released more than 13 million metric tons of carbon dioxide, nitrous oxide and methane according to a just released EPA report. The second highest emitter was the coal-fired San Juan Generating Station located within a few short miles from the Four Corners Plant.
Last week I met with Mike Eisenfeld in Farmington, NM.  Mike is the New Mexico Energy Coordinator for the San Juan Citizens Alliance.  He is one dedicated guy.  Mike and his family have built a straw bail 100% solar powered home in Farmington. He "walks the walk".
I asked Mike if he could take me out to a high point where we could get an overall view of the San Juan Basin area.  I wanted to be able to see both power plants in relationship with the landscape.  His reply was a quick "sure, I know just the place".  And what a place it was.
We climbed to the top of a small mesa.  From our vantage point we had a 360-degree view.  San Juan Plant to the east, Four Corners Plant to the south, Shiprock to the west, and the Colorado Rockies to the north.

Putting it all in perspective was difficult for me.  Numbers release by the EPA is one thing.  Standing on a mesa and seeing it is another.  I was without words. The drum of the power plants, the haze filled sky.

I asked Mike if he could put our feelings into words.  "I think it's important to seek out vantage points that allow us to observe the complexity of natural systems and how they interact with man-made systems for energy and electricity.  The journey of coal and the pulsing coal plants generation of electricity to communities hundreds of miles are fraught with an interesting history, the 50-year legacy of coal providing the fundamental building block for the development of the urban U.S. Southwest. The coal resources that are going into this purported inexpensive way to provide electricity for collective human needs takes a toll on the integrated natural resources that are overlooked and/or undervalued in the process, including water, land, air and the people/communities directly impacted by energy export."


Hiking down from the mesa I couldn't help but hear over and over again in my mind..."you just have to see it to realize the reality of the numbers".

be strong, be safe, Carlan
Posted by Carlan at 11:15 AM No comments: