Dam...Hoover...that's a lot of concrete 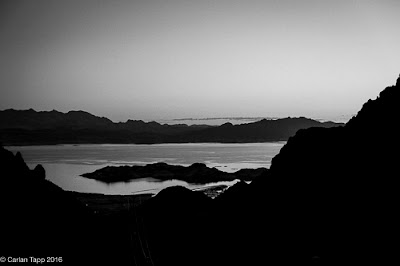 Awaking to pre-dawn light is always a special experience.  This morning was one of those moments.  Early golden sun light shimmered off of Lake Mead as the sky turned deep colbalt blue.  Grabbing the camera, looking out the window of my motel room, the scene took my breath away.  In a sleep caused daze, quickly adjusting the ISO, shutter speed, and f stop, the stunning moment was captured.  Realizing I was shooting in black and white, I went back to bed.  So much for color photography early in the morning. 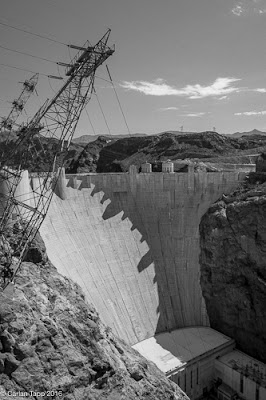 The first concrete was poured into Hoover Dam on June 6, 1933.  Bureau of Reclamation engineers calculated that if the dam was built in a single continuous pour, the concrete would take 125 years to cool and the resulting stresses would cause the dam to crack and crumble.   Instead, the ground where the dam was to rise was marked with rectangles, and concrete blocks in columns were poured.  A total of 3,250,000 cubic yards of concrete was used in the dam before concrete pouring ceased on May 29, 1935.  The wedge-shaped dam is 660 ft thick at the bottom, narrowing to 45 ft  at the top, leaving room for HWY 93 connecting Nevada and Arizona.  Times have changed things.  Today HWY 93 no longer spans the dam.  You are able to ride or drive across the dam, park for $10, then walk the length of the massive chunk of concrete. 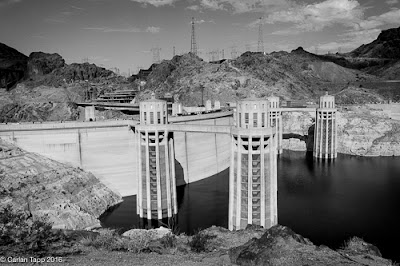 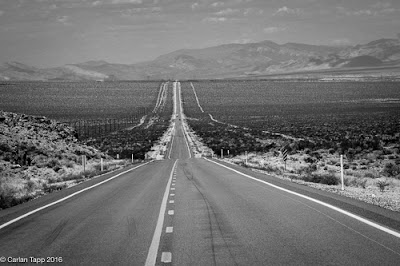 Several miles east of Las Vegas HWY 93 appears from under Interstate 15.  A sweeping turn to the north puts me back onto a peaceful two laner.  Finally, out from under the interstates cutting and covering the classic highway. 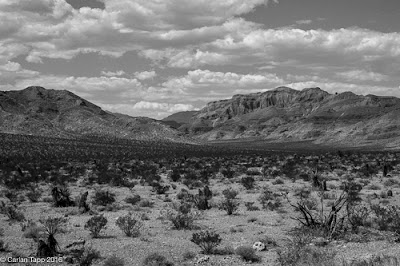 HWY 93 traverses the entire length of the Pahranagat Valley.  The valley is a narrow ribbon of green, no more than 1 mile  wide, like an oasis in the vast Nevada desert.  It is approximately 40 miles long running north and south.  The southern half of the valley including two lakes is home to the Pahranagat Wildlife Refuge. 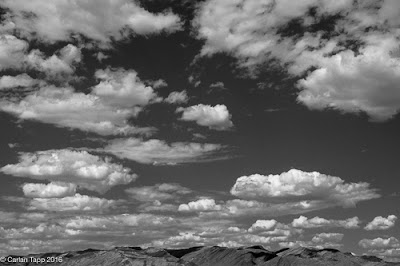 The Pahranagat Range marks the beginning of the Great Basin.  Great it is.  Ranges of mountains  rising  rapidly from the plains.  Clouds filling the sky east to west, north to south.  Breathing easy now.  Feeling the rhythm of the road.  Shadows from the clouds cool the air on my back.  My heart becomes one with the thump of the motor. 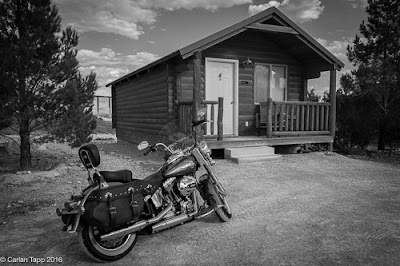 Kickstand down in Alamo, NV at Windmill Ridge Cabins.  Cabin 4: fishing cabin with rods and reels on the wall.  Don't plan on much fishing, but the rods and reels are handy just in case I have a fishing dream.

Did you know Elvis was a motorcycle guy?  Had many bikes.  History tells us his favorite was his Harley-Davidson.  Look close...I'm riding the same type Harley Elvis rode.  Maybe a better way of saying it...I'm riding with Elvis.  Couldn't get any better than that.

be strong, be safe, Carlan
Posted by Carlan at 8:13 PM