Heading' West to the BIGGEST Camera in the West 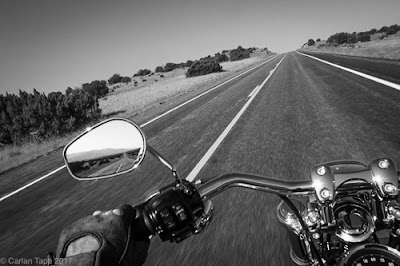 New Mexico US HWY 60 West.  Sun on my back.  Highway feelin' so smooth it's like floating across the landscape.  Headed West lookin' for the big camera. 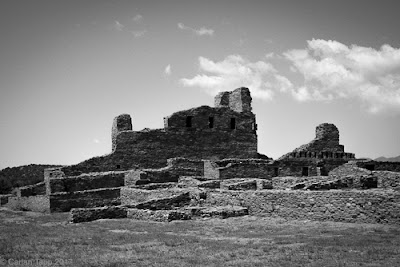 Rule of the Road #1.  Always stop, make a u-turn if necessary, whenever you come across something you didn't see originally on the map.  Abo' is one of three ancestral sites making up what are called the Salinas Pueblo Missions National Monument.  In the stones of the Abo' pueblo ruins are faint echoes of the communities that lived there 300 years ago.  The people forged a stable agricultural society with roots back as far as 7,000 years.  A major trade center with a population of more than 10,000 before the influences of the Spanish explorers.  After 1670 pueblo life was radically altered and the villages were abandoned, the pueblo people dispersed. 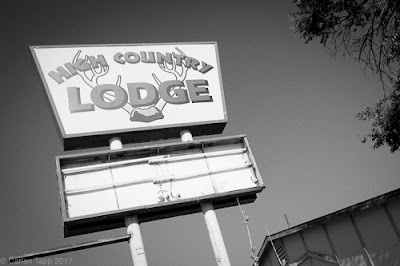 Magdalena, NM gateway to the VLA. Very Large Array, or simply the BIGGEST camera in the west.  Kickstand down at the High Country Lodge.  Better described as a "classic 60's type motor court". 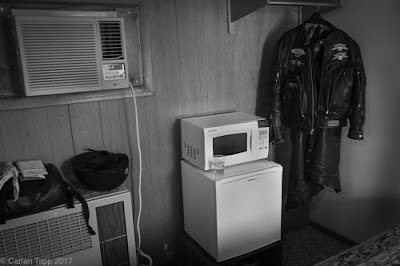 Complete with modern day conveniences.  Always lookin' for a place to hang my leathers.  Never seem to get much use from the microwave or fridge. 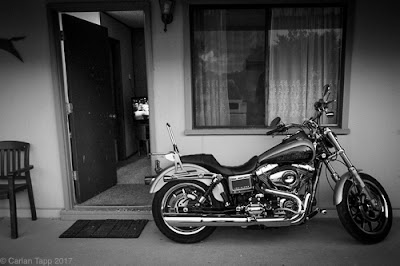 Rule of the Road #2.  If a storms approaching park as close to room door as possible.  This provides for easy access to move the bike into the room under severe weather conditions. 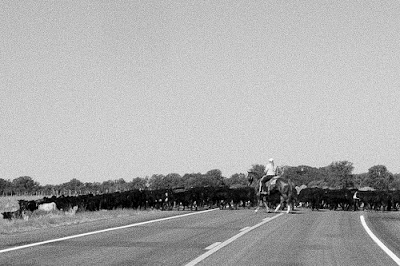 Magdalena is known as "Trails End" for the railroad spur which was build to transport thousands of head of cattle from the west.  Heading west out of town after a "real cowboy" breakfast at the Magdalena Cafe US HWY 60 was the main route for an early morning cattle drive. 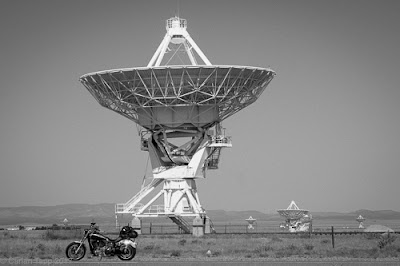 Twenty-two miles west of Magdalena in a high mountain plateau are 27 dish antennas each 82 feet in diameter, weighting 230 tons.  The Very Large Array.  The BIGGEST camera in the West.  What is it?  How does it work? 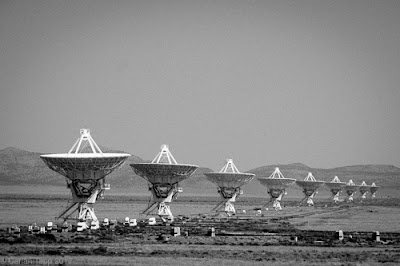 The VLA is a radio telescope that makes detailed images of astronomical objects by collecting and processing the radio waves they naturally emit.  The radio waves are processed into digital images.  By studying these radio images, astronomers can see things invisible to optical telescopes.  The 27 dish antennas all work together as a single system.  The dishes are on rails in a Y-shaped configuration.  They can be moved to a maximum span of 22 miles.  When they are spread out they act like a wide angle camera lens.  Brought together, they form a telephoto lens.  Here's the big one.  A central supercomputer takes in data equivalent to 2.3 billion Tweets per second and performs 10,000,000,000,000,000 mathematical operations per second.  Now that's a lot of tweeting!  Pretty awesome stuff going on at the VLA.  Found ice on Mercury, making major contributions to understanding that billion-light-year-across empty "hole" in the Universe, and exploring the mysterious central region of our own Milky Way.  Way cool...or far out!  One BIG camera to say the least! 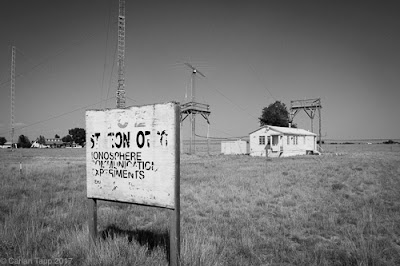 Heading back east on HWY 60 turned north on HWY 41.  Another, u-turn.  Just north of Moriarty spotted a field of various antennas, what appeared to be a deserted building with a paint peeling sign. "Ionosphere - Communication - Experiments".  Thinking this could only be in New Mexico.  Ancestral Puebloans studying the stars, the BIGGEST camera in the west making photographs of billion light year away regions, to a single individual lookin' to communicate with whoever may be out there.

Nothing better than two wheels, a camera, and a two lane highway.